Stratics Veteran
I have been searching the best creature to farm regular hides for my Tailor and so far I have tried cows/bulls but they didn't offer much. Then I did Hiryus but the other spawn around then was very, very annoying, especially those elite ninjas...sometimes 4 at the same time after my pets out of no where...

finally I started hitting on Gamans and they seemed to offer pretty good hide numbers and in a safe place with fast respawn.

My question is if there is any other better spawn for collecting regular hides and where is it?

Stratics Veteran
I go to thrasher in Fel. Can take a minute to fight your way down to his corner, but when you do, you get 100 hides every 30 seconds, so bring an empty pack and a bag of sending and go nuts.

Theron said:
My question is if there is any other better spawn for collecting regular hides and where is it?
Click to expand...

I prefer the bulls & cows near Delucia, more specifically Felucca Delucia. Resources are doubled in Felucca, which includes hides, ore, wood, scales and wool. In addition to the bovine that spawn, there is a nice sheep spawn near there, for double wool gathering.

I find this to be a very useful tool: http://www.uoguide.com/Butcher's_War_Cleaver.

Gamans are also good to hunt if you are also gathering Gaman Horns for this quest giver: http://www.uoguide.com/Lorekeeper_Broolol_the_Keeper_of_Tradition.

Stratics Veteran
I have tried the Thrasher, but the area is anything but nice to be in...it does give nice hide volumes, but the Gaman are much easier/faster to kill and with a safe environment around.

EDIT: I had a problem with skinning, but found out that it was due to having replaced the skinning knife I was holding before...
Last edited: Mar 19, 2014

Stratics Veteran
Stratics Legend
I would have to agree with Delucia Felluca, but Hiryu are good as well

Stratics Veteran
Stratics Legend
I use brown bears near moonglow zoo in felucca. There are quite a lot, the respawn is ok too and double hides in felucca. I use a butchers war cleaver tho, cause i need the leather not the hides.
T

Theron said:
finally I started hitting on Gamans and they seemed to offer pretty good hide numbers and in a safe place with fast respawn.

My question is if there is any other better spawn for collecting regular hides and where is it?
Click to expand...

Gaman are my preferred method of getting large amounts of regular leather. However, if I have a character who is training tailoring (it's a skill I'm trying to raise on every shard) and also needs to raise their magery and/or their stats, I have another way of getting regular hides that also lets my character train tailoring and magery and raise stats too, all at the same time.

First I fill a BOD book with regular leather footwear or leather armor BODs, depending on what my character's current tailoring skill is and which BODs will give the best gains.

Then I make sure the tailor has a butcher's war cleaver or a skinning knife with spell channeling. If neither one can be obtained, just be sure to have a bladed weapon and scissors.

Then I take the tailor to Barrier Island outside of Trinsic. It no longer has a brigand spawn, so it is very, very safe. Now have the tailor use magery to kill anything that moves and skin it with the butcher's war cleaver or skinning knife. Kill until the character's pack is full or he/she is out of mana. Now start filling BODs with the leather while mana regens. Every once in a while go turn in BODs.

I'm not sure if in the long run you gain tailoring any quicker doing it this way versus standing in your house and making a huge pile of stuff in your salvage bag and then unraveling it. However, I find it to be a far less monotonous method for killing a few birds with one stone so to speak (i.e., raising tailoring, magery, meditation, eval, and stats) and actually accumulating a little bit of gold at the same time by doing the BODs. Something else you can do at the same time while you're moving around to kill stuff is pick up the ginseng regs which mysteriously spawn all over the island, in case you're also going to be working on alchemy or inscription.

When you're ready to get mass amounts of spined leather, lowland and ruddy bouras in eastern Ter Mur are an excellent source and you will also get some boura pelts as well as a few harpsichord scrolls, duplicates of which can be trashed for cleanup points. Depending on how widely you roam, you may also get some gold from killing other small spawn in the area, demon bones, regular leather, slith tongue, silver serpent venom, junk loot to unravel, etc.

A good way to get horned leather is from killing high plains bouras. You'll also get a boura pelt from each one and may also get lucky and get a boura tail shield.

My favorite way to get barbed leather these days is by taking out merchant ships and raiding their holds! Sometimes I get as many as 950 barbed leather from one ship (as well as loads of ingots and wood and sometimes other goodies)! It does take some patience though to gather the saltpeter or a bunch of gold to buy it, and then you need an alchemist to turn it into black powder, and tinker, tailor, and blacksmith/carpenter characters to make cannons and the other finished items you need. It's a bit of a hassle but I've found it good incentive to work on all of those characters. And my fisher character really does not need any new/extra skills to take out the merchant ships. Just takes time/patience to find the ships and then blast away with the cannons. The poor NPCs on board just stand there or walk around as if nothing's going on and just let you board their ship and take all the goods away without reacting at all. You just have to be careful to not drop anything on them while you're shuffling it into the hold from other boxes on the hold because they won't give it back if you do! LOL

If you need bones and don't want to kill serpents in Destard (that's where I always used to go), a couple of other good, reliable sources are the shadow wisps at the champ spawn near the Spirituality moongate in Ilshenar, ant lions in the solen hives, and tsuki wolves in Tokuno. There's also a swampy area way south on the Homare Jima island in Tokuno where you can find lizard men and then below that some other jungle-inhabiting spawn that includes the giant serpents. There's a healer or two hanging out in the middle of the mess. There are also some acid-spilling monsters there that drop some of the peculiar seeds if you're into collecting seeds. Can't think of their names right at the moment!

Stratics Veteran
If you Hail from Siege Perilous You can get here via the umbra Hub. It is simply marked Ice Island I believe. 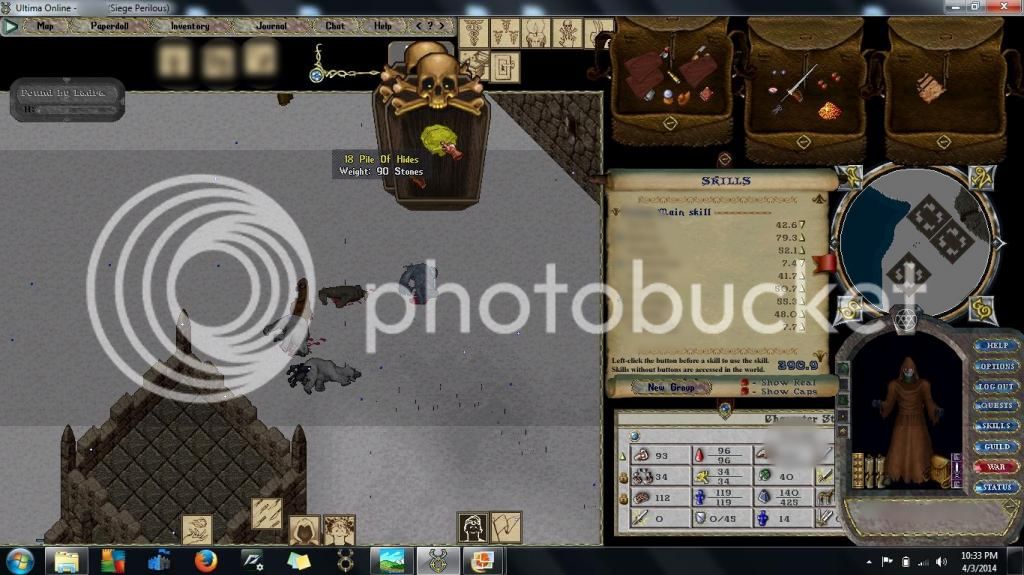 Stratics Veteran
Stratics Legend
I have spent a lot of time on Ice Island killing stuff. My tailor is a tamer too so he has gone to Delucia and tamed bulls then killed them for the hides and to respawn them
Show hidden low quality content
You must log in or register to reply here.
Share:
Reddit Pinterest Tumblr WhatsApp Email Link
Top