Please include character name and brief history of your character. You can add pictures as well.

Scabby was held prisoner by pirates and was being taken to the enslaved goblin camp at the Abyss when Icky Rotblossom and Ozog Giantfart rescued him.

Scabby now lives on Pitmuck Island (Horseshoe Island) at the Pitmuck Fisherman's Tavern. Scabby has studied hard so he could never be kidnapped again. He is a Mystic/Mage Bard and enjoys going on hunts, biting people, farting on people, and peeing on people, especially Ashlynn!

Ace Reporter for the PaxLair Times and Mycologist Extraordinaire! Contrary to LIES and FALSEHOODS often spoken about her, she is not a practitioner of the dark arts of necromancy but instead practices a unique brand of mysticism. She even wrote an article about it so it must be true.

Ashlynn had an uncle but he was executed for practicing bad magic. By executed, I mean to say they walled him up and left him to die. It's all very tragic.

Ashlynn likes mushrooms, booze, and the sound of running water. Doesn't like goblins much. Or gypsies. Or slow news days.

*edit* Here is a quick picture of Ashlynn engaging in one of her favourite activities! 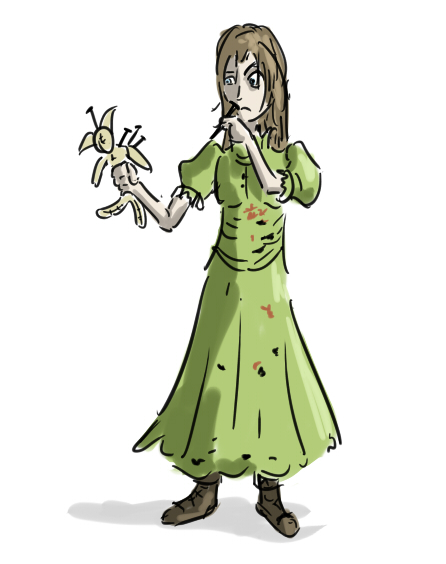 Nubby left the always dark place awhile ago, when he left he was just a "squasher and sumtimes squisher fer da boss man" as he puts it, but has since learned to tame large creatures. After leaving he met up with an unknown woman known only as "da lady" she took him to a place he only calls "da green place". At "da green place" he lived in a hut in the woods. Here is where he started his writings. After a few misunderstandings the residents of "da green place" they gave him a boat, which he dubed Nubby's Huwaft. He drifted on the seas learning to fish until he "landed" (more like crashed) on pitmuck, where hes had lived ever since.

Stratics Veteran
Stratics Legend
Campaign Supporter
Ozog giantfart
goblin
mob leader pitmuck
Ozog Come from under turnip leaf,he dunno why is where he open his peepers for 1st time. He roamed the lands alone, mostly hidden as da big peooples always kicked him. One day he ran into 2 gurly goblins hidden ina woods,Ido Smellafart and Pillowpants. They bonded together and started looking fer more lost goblins to make ther MOB stronger.They no feared peoople no more they had each others back.
Last edited: Jan 16, 2013

Stratics Veteran
Stratics Legend
UNLEASHED
I be a slug. I live under a rock. that's all

Winfield was born in Yew over 70 years ago. He is an old man now, but seasoned with much experience in Britannia. He is now a diplomat by profession and is the Governor of PaxLair. He is well known for his interest in fishing and dabbling with the arcane nature of the magical ether, spells, and rituals. He is a diplomat throughout the Chesapeake Shard meeting and greeting cities, towns, guilds, and people. 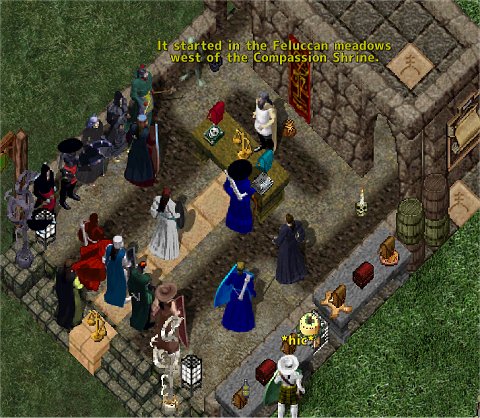 Tehan was born and raised in Yew. His parents were slaughtered when he was just an infant, in an ambush by orks, as they were returning home from the city. The young boy was found on the side of the road, surrounded by incinerated ork remains. While there was no eye witness, rumor has it that he had an innate gift with magical fires, and that he burned the assassins to ashes where they stood. He was found by the druids, and sent to the Lycaeum in Moonglow to develop his magical talents.

Tehan loves fire and explosions and understandably hates orks with a passion. He is somewhat short tempered, and goes berzerk when friends and family are attacked. This was extended to the citizens of Yew when he took office as Governor of the city.

He also is a seasoned sailor and captain, hunting down pirates on the high seas.

Stratics Veteran
Stratics Legend
Campaign Supporter
OZOG
WAS AN ESCAPEE FROM DA ABYSS. WHERE HE WAS A SLAVE TO A BIG DEAMON. MANY GOBLINS SLAVES WERE THERE. HE AND PILLOWPANTS AND IDO . ESCAPED 1 DAY. RAN RAN RAN.
PILLOW STOWED AWAY ONA BOAT . IT LANDED ON HORSESHOE ISLAND. WHICH IS NOW PITMUCK. SHE GOT OTHER 2 THERE. THEY FOUND A VERY COLD CAVE. OZOG REMEMBERED AN ICE CREEMS RECIPE. THE 3 OF THEM GOT IN THE ICE CREEEMS BUSINEES, AND GAVE THEM AWAY IN LUNA. THE RES T IS HISTORY. PILLOW NOW BEES A GAURDY ON PITMUCK. IDO WENT BACK TO HER FAMILY
they also searched for other goblins and help others escape
Last edited: Jul 6, 2014

A Elfen child, orphan at a very young age is taken in by the Guild DoD, she is made a honored member of the clan. All is well till one day she awakes to fine she is alone once more. The clan has left these lands. As the last of the DoD she will carry their banner with pride. 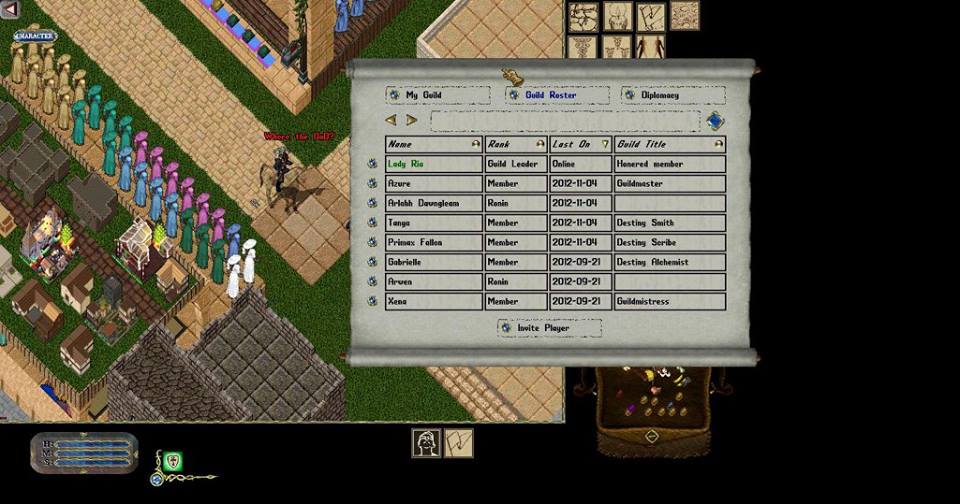 Checked the DoD HQ, it belongs to someone else. 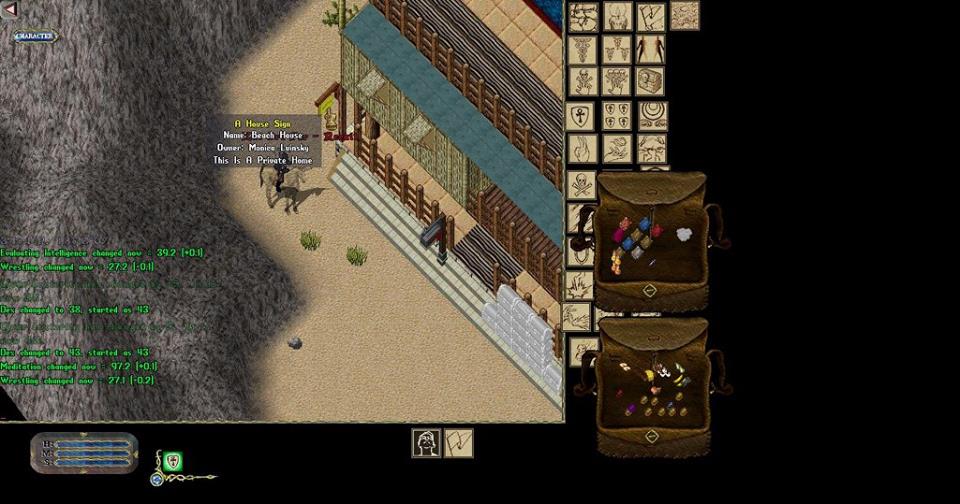 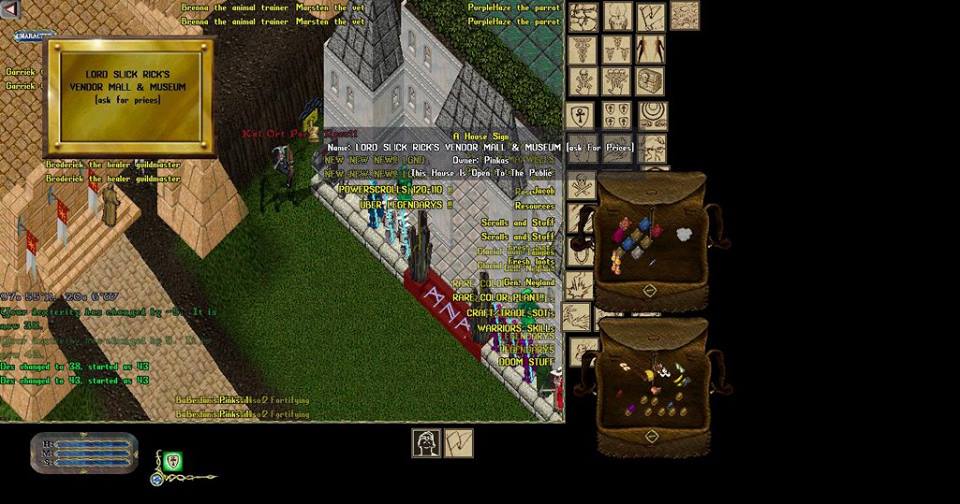 An empty plot where another member's house was. 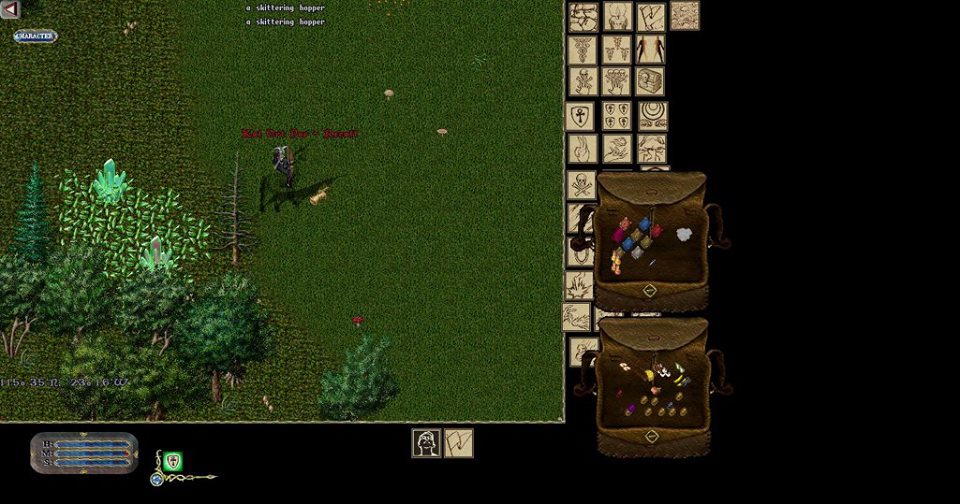 Bought a new dress and better LRC, will retain the DoD guild as its lone active member till such a time comes that others return. 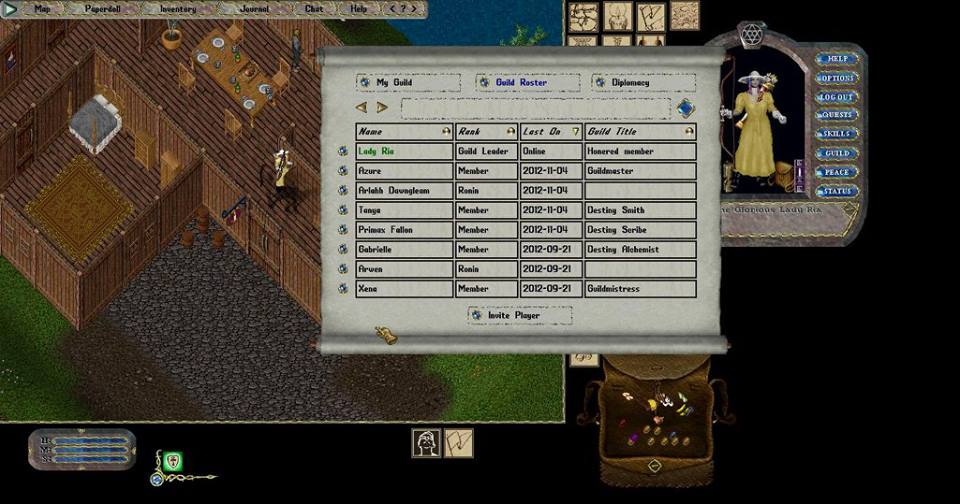 Now she seeks to make alliances with guilds of this land, thus keeping the banner of DoD waving high! The DoD was and still is an Honor guild, most were T-hunters, crafters, a few warriors such as the Lady Ria, but alone she can do little, so she seeks allies here.

Zalan was born in the time before the shattering Gem of Immortality. When the lands of Sosaria where whole. At a young age, Zalan was gifted with the blade. He was able to best many other Elven swordsmen. It was decided he would become a guardian of the World Tree. He was then sent to Tokuno to train with the Samurai. After training for 10 years, be was ready to return home. On his return trip home, the Caravan was attacked by a Horde of Demons and Undead. He was feed upon relentlessly.

When he awakened he was changed. He gathered his belongings and stumbled into Heartwood. His own kind had drawn their blades. His father leader of the Guardians of the World Tree said "Come no closer you abomination." Not wishing to draw blade against his father he fleed. Elves gave pursuit, and chased him to the location now known as Sanctuary. Ten Elven Arcanist performed a ritual that imprisoned Zalan there. The shattering of the Gem of Immortality further corrupted and twisted Zalan Immortality. With the reawakening of the Elves, Zalan was able to break the bindings of his imprisonment. Slowly gaining his supernatural powers back. He now roams Sosaria looking for a purpose, besides slaying other Undead and Demons.

Professional
Stratics Veteran
Stratics Legend
Campaign Patron
Update 6/20/17:
Regarding the previous description (see below), the building housing the "whinery" recently fell under a cloak of invisibility. It is uncertain when or where or if it may appear again. Only time can tell...

Maypop is a rather quiet elderly goblin and a homebody at heart. She is also a distant relative of a missing Pitmuck chef known as Icky Rotblossom.

After a recent visit to the peaceful isle of Pitmuck, Maypop decided to retire there. She initially opened a kitchen; however, after realizing that most citizens are on diets these days, it seemed more sensible to spend her time developing her skills in winemaking and brewing. When Maypop isn't working she is usually napping (her second favorite activity, with the first being taste-testing the products of her labors).

"Da Goblin Whinery" (spelling isn't one of her skills) is open 24/7 and visitors are always welcome.

Stratics Veteran
Poggrog the Silent wan't always a goblin. Many years ago he was a Successful Mage in the Royal city. He was proficient in Wizardry, Mysticism, and Spellweaving. He was a rising star in the magic world. This did not sit well with a Gargoyle magic prodigy named Drocmoor who plotted against him.
Drocmoor lured him into a trap promising powerful magics to further Pogg's studies. Pogg to this day does not know what made him fall asleep that fateful night, but he woke in a steel cage with the evil Drocmoor drawing dark sigels around him and chanting. He then started to cast a powerful polymorph spell.
Things looked bleak for Pogg, but then something went very wrong. The spell hit the steel cage and splt with a thundering explosion. When the smoke cleared Pogg the Goblin lay amongest the shatered remains of the cage with a deep cut across his throat from the steel shrapnel.
Soon Gargoyle officials arrived to find the injured Pogg and a unconscious Human wizard. The wizard was arrested for experimenting on a sentient being (even if it was a goblin) while Pogg was nursed back to health and then shown the door. Wandering for years in despair Pogg searched for a way to break the spell on him. Then one day as he was reading a tome he found lying on the floor of the Luna bank he met another Goblin who offered him an Ice Cream cone, and asked him if he would like to join his mob. Desperate to belong anywhere Pogg jumped at the chance. And that's how Poggrog the silent became part of Pitmuck's Mob, and became known as the guild reader.
Time has past, and the great King is gone, but the Mob remains. Coming out of the shadows and rejoining the world.
And Pogg who has grown to love being a goblin more with each passing day fears the day when the spell might break...

Stratics Veteran
Welcome, Poggrog of MUCK ! Or should I say.. Aarp !

Stratics Veteran
It has brought me much happiness that Oz gave Pogg the title of Guild reader, and Puck got called Lucky Pucky. He certainly had a knack for names
Where ever you are Buddy we're still thinking of you.
Show hidden low quality content
You must log in or register to reply here.
Share:
Reddit Pinterest Tumblr WhatsApp Email Link
Top