Stratics Veteran
For a start I'd check out this thread from the Mage forums:
Mage/Bard skill question

Hiding and Focus are a complete waste of points.

I'd pick up Discord and go to 120 Music/Prov/Discord/Magery/Med as a minimum with an interchangeable last skill.

yes, your hiding is 100 skill points that your mage spell invisibility or a invisibility pot can recreate..... not worth the 100 points....

focus? same thing. you will run out of mana regardless but you can offset this w/ raising int to 150 and using mr 4 (up to max 30 mr) and mi 10 on all possible armor pieces.... no need to throw 100 points into focus for something you can take care of more easily

if you want to maximize the bards potential (up to 120 real skill, there are progressive bonuses... the more skills and the higher, the better the bonus), you will have to lose eval.. or stone it and use it situationally

there are drawbacks and benefits, but ultimately you should play what you like

I'm lazy and just summon a Demon, a fire Ele or a couple of EVs and let them do most of the work. That way I don't really need Eval and hardly need Med either because the summons aren't getting hurt attacking two mobs that are attacking each other. I like to have peace for the times when waiting for another mob to spawn or drag over. I find disco better for my tamer. I disco stuff and then send pet to kill, great for one big mob.

You could keep focus, not that it's difficult to raise, and add mysticism. Focus works for mystic as eval does for margery, but ideally (esp for the colossus) you'll need 120/120. Since you're newly returned it would be a fun new magic to try, and you'll find it is a very powerful skill.

Mysticism has loads of healing/defense utility and also the most powerful summon in the game, the Rising Colossus, which will be a big help in those single target fights. The RC will also benefit greatly from the provo masteries.

Hard to argue, however, with Lord GOD's suggestion, especially as you've already began training discord. You should note that the strength of your bard mastery abilities is increased with each additional bard skill you have on your template. The bard masteries also passively reduce the painfully long cooldown on the active use of your bard skills.

I will add to his recommendation by mentioning spellweaving as your additional skill. Again lots of defensive utility and also the highest damaging single-hit spell in the game, Word of Death.

I'm of the opinion bards could use a little more love content-wise, but they are still loads of fun to play in groups or solo. So welcome back!
L

Stratics Veteran
Mysticism for fun new thing to try, sure. For defense, sure. But I would disagree that Colossus is best option for summoning.

I rate Spellweaving highly for certain things and on certain templates but I don't think it's the highest damage single spell with WOD, what's the highest WOD damage seen?
K

Stratics Veteran
UNLEASHED
I've done over 900hp from a single WoD on my bard (over 150 SDI on items + reaper form + arcane empowerment). I haven't quite reached 1k but maybe it's possible as I typically play solo and I'm geared up to be well-rounded rather than putting every single SDI item/boost on my guy to see what the maximum damage could be.

For argument's sake if we assume 1k damage could be done I still don't think that's the most overall damaging template because WoD can only be used on the last (30%??) hp of a mob whereas a tamer could have a pet doing damage the entire time totaling more OR using a warrior (sampire/archer) with honor/slayer which I average 200+hp per hit and I'm hitting 3-4 times in the time it takes to cast WoD AND I've been doing that for the entire mob health; not just the last 30% or so...
L

Stratics Veteran
I've done that sort of damage with chain lightning/meteor, which obviously you don't have to wait until 30% to use. That was on a character with about 90 sdi and slayer.

Magery spells do benefit from slayers, which is tremendously effective for chain lit and meteors, but even with a slayer I've never hit over 1k dmg with magery.

In this totally unrelated to OP thread: WoD not working on Dinos? 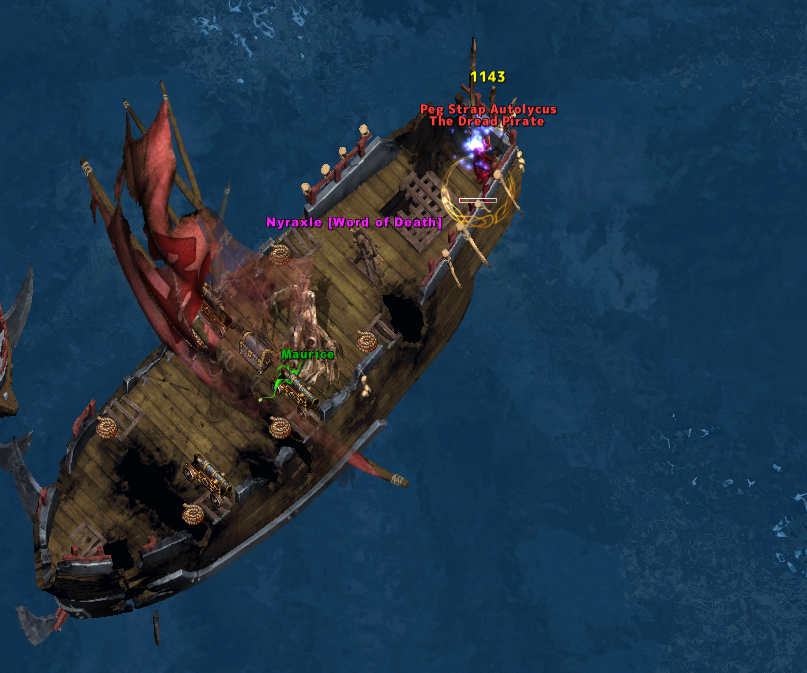 Brought out a bard for another test with Inspire (+22% SDI) 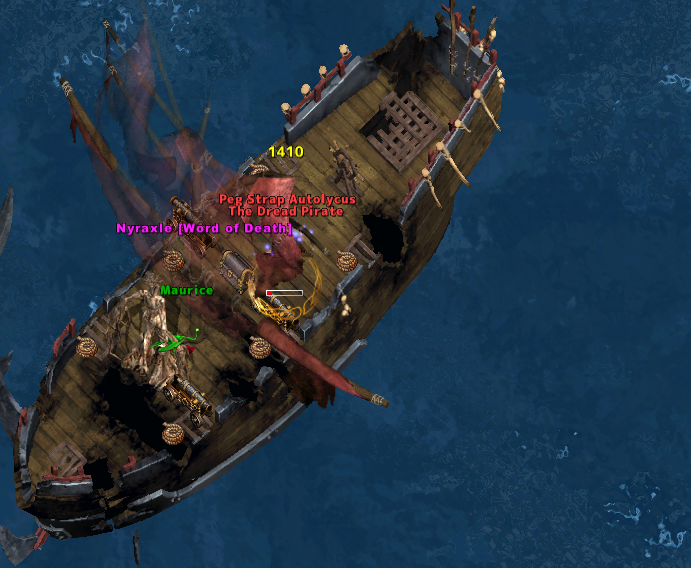 SW is also very good in groups for heals on party members pets, and Essence of Wind is a powerful AoE. Not bad for 120 skill points!

And I'm curious, Lord GOD, as I usually defer to your knowledge, what is a better summon than RC? 2 ev's may out damage, but only with energy. RC's are much tankier, which may help our fellow bard in his single fights, and do physical dmg along with AI. They seem to be harder to dispell, but that may be a subjective observation. The 5 slot thing is definitely a consideration to take, but on my mystic bard I just see that as a good excuse to rock stone form!
L

Stratics Veteran
Isn't WOD direct damage, which I understand means it's effectively hitting against a 0 in resist? With certain debuffs you can hit against negative resists with elemental spells. Plus specific slayers. Plus Omen combo. Plus Scribe.

I've hit a 900+ chain lightning on a hydra, using a necro scribe mage, with about 90 sdi and Dragon slayer. Unfortunately I don't think I had weaving on that character at the time. The highest WOD I think I've ever seen was in the 700's that was fully buffed but with a similar amount of SDI.

If an RC gets killed or Dispelled you're open. If your EV gets killed or Dispelled your other EV is potentially still there, although granted you can pre cast the next one, but that does mean you're not able to cast or Bard anything else. 2 EV's will cover more area. Ever tried working a spawn with a Colossus? It's woefully slow Dispelling and relocating it every few minutes. Being 5 slots is a drawback. As is Stone Form if you're not under direct attack, due to it's penalties, with Summons on a Bard you shouldn't be under attack so no reason to put yourself on foot in walk, with casting penalty.

I would also note that with Mage summons you can also have 2 Earth, Fire eles for melee, or 2 Air eles for spell dumping.

EV's will definitely be the better choice on a champ spawn, aggroing more targets and spreading more damage. And if all of your enemies are provo'd air is a very good, and often neglected choice. All of the magery summons also don't need a secondary skill to be fully effective.

Not that RC would be an effective tank on its own on a solo run against a peerless, but against something like Navery the RC holds up a lot better than the magery summons. Having a choice depending on your situation would be the beauty of having both Mage and Mystic.

I would also argue that since you're not getting hit, and all nearby enemies are properly provoked, being dismounted isn't as much of a disadvantage. At least until you are juggling provokes over a wider range than you really should be, which I do a LOT. But the OP seems experienced in the bardic arts, so my RC suggestion doesn't really apply for spawning or situations with lots of provokeables; just those times when everything else is dead, and you're stuck with the 1 badass.

You raise a good point about WoD dealing direct damage, which interestingly is the flip-side of the point I also wanted to raise. Against a high resist target you will probably deal more damage with WoD. If you can debuff the resists into the negative with discord (which our friend, the OP, will soon fall in love with... Once he gets over hating training, lol), chain lightning --or with discord+necro, meteors--would be pretty nasty.
L

Stratics Veteran
Agree. It does depends what you're fighting.

I think in general you're better off maximising one aspect of your template, so for a Bard you can't really ignore Masteries, the only exception to that would be Discord hybrids.

It is easy to come up with grandiose ideas for templates without playing on the synergies between skills and spread yourself too thin. I find myself doing that at times, and then you lose a lot of slots putting skills on jewels. A 6x120's temp just seems too dull on paper, but perhaps I favor the "min" aspect of min/maxing too heavily, lol.

Another important consideration that occurred to me is the OP is free to use the bard masteries, even if he hasn't upgraded to ToL since returning. Tbh the masteries are really the only reason I upgraded myself!
Show hidden low quality content
You must log in or register to reply here.
Share:
Reddit Pinterest Tumblr WhatsApp Email Link
Top