Baja Stratics News: "The Widow and the Virgin of Tellu"


Amber Witch said:
A few minutes ago while talking with the lovely Fay, The Event Announcer, about the location of the Solstice Stag we were joined by The Widow. The following is the conversation between The Widow and myself.

The Widow: I was wondering if I should set up for a telling of The Tale.

Amber Witch: Which tale would that be?

Widow: Well, my husband, as thou knowest did come from another World. And in that world, they told at Solsticetide an ancient tale of the Virgin and the Crone. A love tale, indeed.

Amber Witch: Where would you choose to tell it?

The Widow: The docks at the Skara Brae Fairgrounds would do nicely.

Amber Witch: Is there anything I can do to help you prepare?

Amber Witch: That I can do. Do you have a day and time?

The Widow: Tomorrow indeed. Perhaps 8 in the evening by the Baja clock.

The Widow: Bring candles to hold.

Amber Witch: I shall pass the word.

Alumni
Stratics Veteran
Stratics Legend
On Monday, the 21st of December (375 A.B.), a small crowd began to gather around the northern fishing pier at the Skara Brae Faireground in Western Britannia. It was there that they had come to witness the Tale of Lady Fahnzjell, of the Virgin and the Crone of Tellu, and the miracle of the Singer and His Song.

It promised to be an interesting evening, one full of storytelling and prophecy.

At the eighth hour of the evening, after Helios had already begun his slow descent beneath the ridge of the Serpents Spine, they gathered there with candles and with open ears. Amongst them was Grand Duchess Wildstar, Lady Regent of the Kingdom of Dawn. Doctor Who, the Spirit of Time. Lord Elladan Faeryn, Paladin of New Trinsic. Claudia Drusilla, Regent of Hearthfire Haven. Magdalena Canzione, Servant of Queen Sheiba. Nicholas Tarrant, Knight of the Kingdom. Ceno, Master Historian of the Tower. Asimov of the Hall of Shadows. The Amber Witch. And of course, Lady Fahnzjell the Widow.

"There are many Stories about this time of year," Fahnzjell began. "Here in Britannia, we have the Solstice and the Yuletide. But there are other Stories. These are in fact Stories from other Worlds."

She paused, her eyes sweeping across the small gathering, seeming to take each individual in turn. "As you all know, my husband was not born here in Sosaria. In fact, he was from a World far, far away known as Tellu the One-Mooned, or Erda, or Bhuva."

"Now, in this World there are many Gods," she spoke, continuing to elaborate on the various divinities worshipped and prayed to throughout the Realm of Britannia. She spoke of the inherent connection of these Divine Beings. "But these Gods are the Whole of Story Itself. The Unbeginning and the Unending and the All-Between."

Elladan nodded in response. "The One."

"At the time of Solstice," Fahnzjell continued. "They tell a Tale on Tellu. Of a God they call the Singer, the Song, and the Sung. In the middle of the Story of Tellu, the people of that world began to not listen, and so the Singer said, 'Let Us sing Ourselves so they might hear.' And a new Chord was struck to shatter their unhearing."

She paused for a short breath. "There was a Crone in the desert, Alzhabath by name, and her kinswoman, Marah, a maiden."

"Now in the striking of the Chord, Alzhabath did conceive, for she would be the mother of the Foresong. As for Marah, she heard the Chord, and so she sang in harmony with it. And within her womb came to resound the All-Sung. For there is nothing the Singer cannot Sing."

The Widow spoke of how the spirits of the World gathered to praise the birth of the All-Sung. "...for beasts and birds, have ever known the Song. And so too the Stars of the Skies, which in the Heavens sing their own song in praise of the Singer." She smiled. "They did gather close to hear the Song brought forth. And all the undergods gathered lutes and lyres and tambours made of moonlight to strum and rattle in joy of the All-Sung Song."

She raised her voice in a chant. "'Wondrous is the High Songsinger,' chanted the undergods. 'And let all of Tellu sleep in Harmony.'" She paused for another breath, lowering her voice. "This is the Tale they tell on Erda, of the Day the Song was Born. Who would have them from their unhearing." She again swept her eyes over the crowd. "And that my children, is the Tale."

They who gathered raised their hands and clapped in approval of Mother's Tale.

"In the custom of my husband's people, I have gathered all of you here to wish you all what he would say: A Merry Christmas. Glad Yule and Blessed Solstice to all of you."

"Amen," one spoke. "And a Blessed Christmas to thee."

"You as well, mother," spoke another.

"I wish you a safe and happy day close to the ones you love," cheered Dr. Who.

"This has been a long and trying year in my Story," Fahnzjell said to them when the sharing of Christmas well-wishing died down. "I wished indeed to let all those whom I hold so dearly know that I am glad to know them. Thank you all."

"Put it behind, Mother," Elladan spoke in a comforting voice. "Hear, Hear, and We Thee."

"Baja is a right wondrous place," she said to them. And all of you, including you unseen ones, are right wondrous folk. Thank you all for sharing a bit of my husband's Christmas cheer with me." Lady Fahnzjell then suggested that the gathered return with her to the City of New Britain to share a meal of figgy pudding and some Christmas Cheer.

"I shall provide a Gate," Wildstar announced, stepping forward, the practiced arcane syllables on her tongue. "Vas Rel Por." The First Bank of Britain appeared through the shimmering blue window of iridescent light that appeared before them.

When they arrived in Britain, they were joined by Miss Sara of the Ancient Order, Lady Jocelyn, and for a short period Sir Brackus of the Britain Town Guard. Magdalena helped the cooking staff to prepare a meal for the gathered, while Elladan told a tale of an Immaculate Virgin and the Divine Child. Claudia Drusilla and Nicholas spoke quietly of Ceno, who had been missing for months.

Fahnzjell the Widow, known for her gift of Reading the Story, was asked what might happen this coming year. She announced a series of prophecies and events that would come to their fulfillment before this years conclusion. 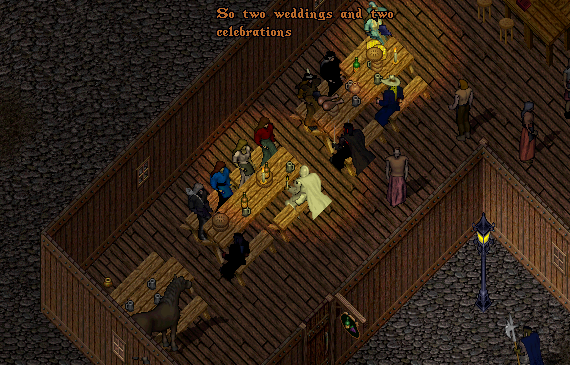 The Britannians shall celebrate the Mating of the Birds in the Queendom of Shieba, and Historian Ceno is tasked with reminding her last representative of her duty. Two Weddings and Two Great Celebrations shall come to pass. Three Great Departures. And a former godling shall walk amongst the world for a short time, described as a reunion of sorts.
Show hidden low quality content