Armor is the equipment that your character will wear to help protect you and alleviate damage dealt in the PvE and PvP aspects of the game.
Armor will also change the appearance of the character. With the choices of armor sets, players can choose how they will look to their linking.

Players can wear these six pieces of armor below.

Attributes is a modifier that can be applied to armor to help improve the character’s performance in battle. The attributes are communal across all professions. So a scholar and a soldier attributes are no different even though their professions are.

The four attributes are below.


Players can gain attribute points from a variety of sources


Each profession can only wear armor that is specific to that players profession.

- Soldiers can only wear heavy armor

- Scholars can only wear light armor

- Adventurers can only wear medium armor

Players will also have the option to wear clothing in cities. This is good news for Role -players who want to pursue a more self story line. Players will also be able to wear almost any clothing that npc’s can wear.

Players can wear a merchant's garb or blacksmith's aprons can be worn by the player. Also player can wear armor sets of various groups such as the Seraph ( human) and Wardens ( sylvari) 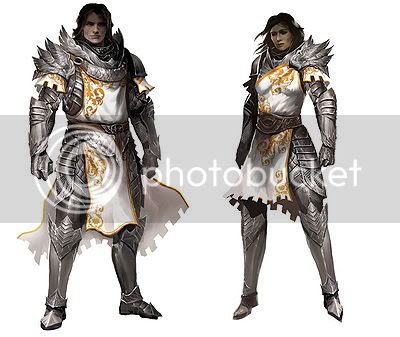 Armor can be gained in different ways

- Purchased from an armor smith

- Crafted through a leather worker, armor smith, and tailor.

A player can acquire rare armor as a reward for completing a dungeon mode. This rare armor is restricted to level and once the level is met, can not be worn again.

- Some armor can be shared by all races

- There are several armor sets each race can only wear and restricted to that race.

Each piece of armor will come in a natural color when acquired. A player can dye the armor piece from its default color and change the hues on each piece up to 3 times and 4 on some pieces of armor. 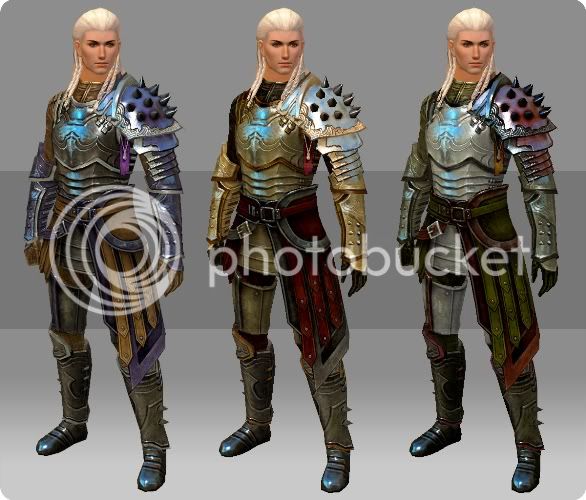 It's worth noting that the game will remember your dye channels. So that when you put on a piece of new gear it will automatically dye it to match the settings of your previous piece.
Click to expand...

Players can apply upgrade components to all armor pieces. This grants an additional bonus to the armor and gives the player an advantage in combat. Some upgrades may have a visual effect.

Each type of upgrade applies to one weight of armor

- Crests are applied to light armor

- Marks are applied to medium armor

- Talismans are applied to heavy armor

Upgrade components can be crafted, bought, found or obtainable as reward. They can be replaced with another upgrade component, but cannot be salvaged from the item.

These armor sets are gained by the Hall of Monuments reward system from the Eye of the North expansion from Guild Wars 1. There are 6 pieces for each set.

It's worth noting that the game will remember your dye channels. So that when you put on a piece of new gear it will automatically dye it to match the settings of your previous piece.

Alumni
Stratics Veteran
Stratics Legend
Thank you for the heads up and was updated above and was added with you getting credit.
Show hidden low quality content
You must log in or register to reply here.
Share:
Reddit Pinterest Tumblr WhatsApp Email Link
Top